The price of the kittens will depend of the generation between the original out crossed.


The Savannah is one of the few hybrid cat breeds currently in existence. It is derived from crossing a domestic cat with a Serval. The Serval is the smallest of the large cats of Africa and is found primarily in the savannahs or plains of Africa, although it can also be found in mountainous regions as well. It is a tall, lanky cat with large ears, a long neck, and a short tail. The Savannah, in spite of its exotic heritage, is considered a domestic breed. However, there are some States, and some countries that consider it wild and therefore illegal to own.

The other classification you will hear in reference to Savannahs is a letter coding. This has to do with when and where in the pedigree outcrosses (non-Savannah domestic cats) have been used. The reason this is important is because when you are crossing two different species there are usually fertility issues. For instance, crossing a horse with a donkey creates a mule, but a mule is sterile so can never procreate. However, in the feline world, crossing two different species such as the Serval and a domestic cat renders only the males sterile. This means that Savannah breeders have had to continue to cross their Savannah females to domestic males for several generations, until the retained Serval percent was low enough that the males were fertile and could be used to breed the female Savannahs.

There have only been fertile Savannah males for a few short years, but the impact on the breed has been tremendous. One might not think that a cat that has only 3-4% Serval could make a difference in developing a domestic breed that looks like a Serval, but remarkably it has made a tremendous difference, as it seems that by doubling up on the Serval genes on both sides of the pedigree, those Serval traits that are so desired are getting ‘locked in’, producing Savannahs that strongly reflect their Serval heritage.

So back to the letter designations: here it is in a nutshell:

A means that one parent is a (non-Savannah) domestic outcross

B means that both parents are Savannahs

C means that both parents and grandparents are all Savannahs

SBT means that parents, grandparents, and great-grandparents are all Savannahs. It is at the SBT (Stud Book Tradition) level that the Savannah is considered a true breed and potentially eligible for Championship with TICA (The International Cat Association). 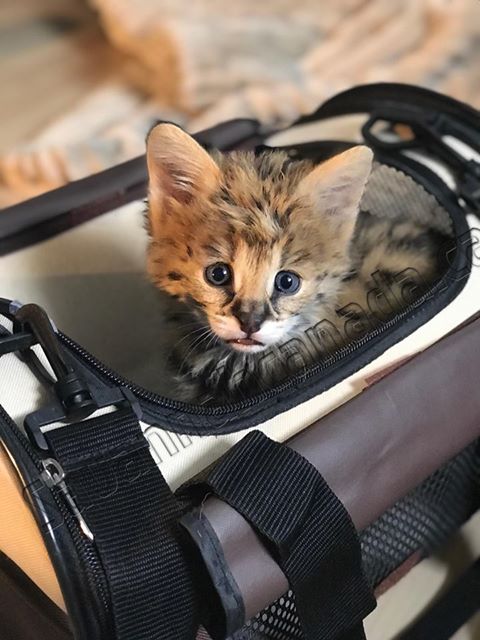 PLEASE NOTE : IMPORTATION LAWS VARY IN EACH COUNTRY . IT IS THE IMPORTER'S (purchaser) RESPONSIBILITY TO INFORM THE EXPORTER , (seller) 4 WEEKS PRIOR TO SHIPMENT DATE , OF ALL THE NECESSARY DOCUMENTATION THAT IS REQUIRED IN ORDER TO IMPORT ANIMALS INTO A PARTICULAR COUNTRY AND FOR ALL THE ENTRY POINTS ALONG THE ROUTE AS WELL AS THE FINAL DESTINATION INCLUDING ALL HEALTH CERTIFICATES AND DOCUMENTS REQUIRED BY CUSTOMS OR ANY GOVERNMENT BODY AT THE TIME OF TENDER.

OTHERWISE , THE ANIMAL MAY NOT BE ABLE TO ENTER THE DESTINATION COUNTRY . ALL DOCUMENTATION MUST SATISFAY ALL PORTS OF ENTRY. FAILING TO PROVIDE THIS INFORMATION TO THE EXPORTER ( seller ) MAY RESULT IN THE ANIMAL BEING RETURNED TO THE ORIGIN OR LICENCED INTO QUARANTINE UPON ARRIVAL . IF THIS OCCURS , EXTRA FEES WILL APPLY AND YOUR ANIMAL WILL BE DELAYED . THE IMPORTER (purchaser) , WILL BE LIABLE FOR ANY AND ALL EXTRA FEES .

Laws governing ownership of Savannah cats in the United States vary according to state. The majority of states follow the code set by the https://www.fsis.usda.gov/wps/portal/fsis/home , which defines wild or domesticated hybrid crosses as domesticated. Some states have set more restrictive laws on hybrid cat ownership, including Hawaii, Massachusetts, and Georgia. Some cities may have laws that differ from the state. For example, Savannahs more than five generations from the serval are allowed to be owned in New York state, but not in the city of New York. The Australian Federal government has banned the importation into Australia of the Savannah cat, as the larger cats could potentially threaten species of the country's native wildlife not threatened by smaller domestic cats. A government report into the proposed importation of the cats has warned the hybrid breed may introduce enhanced hunting skills and increased body size into feral cat populations, putting native species at risk. The report states the Savannah cats are not worth the risk. Savannah cats are legal in every province of Canada, although some provinces have restrictions on the ownership of F1 and F2 generations, and importing Savannahs from the United States requires rabies vaccination and special permits. https://www.canada.ca/en/food-inspection-agency.html for questions regarding exportation and importation please visit : https://www.cites.org/ Any Fish and wildlife agency from your region Many other nations have few or no restrictions on F2 and later generations.